Take your own self-guided tour of Seattle's most infamous Ted Bundy locations. 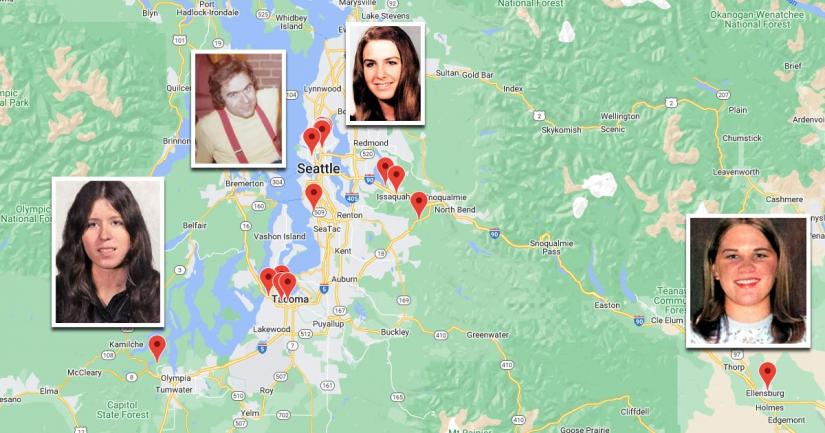 Check out the Seattle rooming house that Ted Bundy was living in when he started his killing spree. Walk through the alleyway where he abducted college student Georgann Hawkins.

Visit the former bar where Bundy met his long-term girlfriend Liz. Or take a trip further south and view his childhood home in Tacoma.

All of our location guides contain useful background information, precise GPS coordinates and a shortcut into Google Maps.

This is the Seattle apartment building where Ted's girlfriend Liz Kloepfer lived. During the early 1970s, he regularly stayed at this location.

The bar where Ted met Liz.

Ted met his long-term girlfriend Elizabeth Kloepfer at The Sandpiper Tavern in September of 1969.

Bundy dumped the bodies of Janice Ann Ott and Denise Marie Naslund at this site outside of Issaquah. It is also believed to be the location where he buried the remains of Georgann Hawkins.

The alley where Georgann Hawkins was abducted.

On June 11th, 1974, Ted Bundy abducted 18-year-old college student Georgann Hawkins from this alleyway in Seattle. Her remains have never been found.

Bundy's rooming house in the University District of Seattle.

This is the rooming house where Ted lived in the University District of Seattle. Bundy started his crime spree while he was living at this location.

Bundy brutally assaulted college student Karen Sparks at a house on this street in January of 1974. Sparks was his first known victim. Fortunately, she managed to survive the attack.

This is the house where Bundy attacked and abducted Lynda Ann Healy. A year later, her jaw bone was discovered at a burial site on Taylor Mountain.

This is the location of Ted Bundy's family home in Tacoma, Washington. This is where he lived during his teenage years.

This is the parking lot where Bundy abducted 22-year-old Brenda Carol Ball. Her skull was discovered 10 months later on Taylor Mountain.

This is the Taylor Mountain location where Ted Bundy dumped the remains of at least four of his victims. The gruesome discovery was made by two forestry students in March of 1975.

In March of 1974, 19-year-old Donna Gail Manson disappeared after she left this dorm building on the Evergreen State College campus in Olympia. In 1989, Bundy confessed to her murder.

This is the Safeway supermarket where Bundy stacked shelves in 1968. In July of 1968, his employment at the store abruptly ended after he stopped showing up for work.

During the late 1960s and early 1970s, Ted frequented Seattle bars such as O'Banion's, Dante's Tavern and the Pipeline Tavern.

In July of 1974, Bundy abducted Janice Ott and Denise Naslund from this state park in Issaquah. The abductions occured just four hours apart.

This is the Tacoma house where Louise and Johnny Bundy lived between 1968 and 2009. Ted also stayed here at certain points during the late 60s.

The campus where he abducted Susan Rancourt.

On April 17th, 1974, Bundy abducted 18-year-old Susan Rancourt from this parking lot at the CWU campus in Ellensburg, Washington. Her skull was found on Taylor Mountain nearly one year later.

After Ted and his mother moved to Washington in 1950, they initially lived with Ted's great uncle Jack Cowell at 1514 South Alder Street in Tacoma.

Ted lived at 1620 South Sheridan Avenue in Tacoma for a short period of time in the early 1950s. This was the Bundy family's first home. Louise and Johnny Bundy moved into this house around the same time that they got married.

The campus where he abducted Roberta Parks.

In May of 1974, Bundy abducted Roberta Parks from the Oregon State University campus in Corvallis.

Nine months later, her skull was found on Taylor Mountain.

Although Roberta was not abducted near Seattle, her remains were found in Washington. As a result, we decided to include her in this location guide.

The site where Bundy was photographed with his Volkswagen Bug.

Before he left for Utah, Bundy was photographed standing next to his tan-colored Volkswagen Bug.

The photo in question was taken by his longtime girlfriend, Liz Kloepfer, on September 2nd, 1974.