Take your own self-guided tour of some of the most famous locations from The Sopranos. 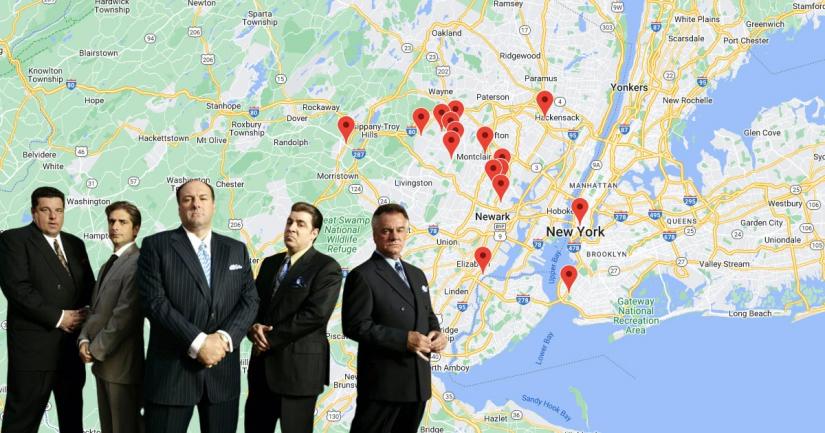 This is a location guide for HBO's crime drama series "The Sopranos", which aired between 1999 and 2007.

Below, we have listed a number of prominent places in New Jersey that were featured in the award-winning show.

Each entry contains GPS coordinates, directions, images and background information that will help jog your memory.

You can also use our map feature to visualize where each place is.

The "Bada Bing!" features in most episodes of "The Sopranos". Along with Satriale's pork store, it serves as a key meeting point for the DiMeo crime family.

In the pilot episode, Tony Soprano's childhood friend Artie owns a restaurant called Vesuvio's. When Tony learns that his uncle Junior is planning on whacking someone at the establishment, he attempts to safeguard Artie's reputation by having it set on fire.

This is the lot where Satriale's pork store once stood. Sadly, the building was demolished in 2007.

This is the house where Tony's mother Livia was living until he decided to put her into a retirement home. The property is located in Verona.

In Episode 4 of Season 3, Johnny Sacrimoni moves into this large house in Caldwell. Although John claims that the move is for personal reasons, Tony is understandably suspicious about why the underboss of the Lupertazzi crime family is suddenly moving into his back yard.

The final (and most controversial) scene of the series was filmed at this parlor in Bloomfield.

Lupertazzi boss Phil Leotardo lives at this house on Grafton Avenue in Newark. Although it is only featured in one episode, the scene that it appears in is very significant.

This is the location of the Soprano family home. Tony lives here with his wife Carmela and their two children, Meadow and A.J. The house is situated in a quiet upscale cul-de-sac in North Caldwell, New Jersey.

In Season 6, Christopher Moltisanti moves into this house in Fairfield with his newlywed wife Kelli. Chrissy decides to purchase the property after he finds out that he is going to be a father.

In Season 3, the DiMeo crime family takes control of the "Lollipop Club" after its owner runs up a gambling debt. Shortly afterwards, Christopher Moltisanti surprises his girlfriend Adriana La Cerva by appointing her as the new manager of the bar.

In the second half of the series, the Lupertazzi crime family hold all of their meetings and "sit-downs" at this bar in Little Italy, New York. It is here that Phil Leotardo decides to take out Tony, Bobby and Silvio.

This is the house where Tony's enforcer, Furio Giunta, lived in Season 4. Shortly after purchasing the property, he decides to return to Italy after his hidden feelings for Tony's wife begin to cloud his judgement.

This is the dealership where Tony Soprano's girlfriend, Gloria Trillo, worked as a sales representative.

At the start of Season 1, Tony decides to put his mother into this retirement home in West Orange after she accidentally starts a pan fire in her kitchen.

The gas station where Phil Leotardo was killed.

In the series finale, Lupertazzi crime boss Phil Leotardo is shot dead at this Raceway gas station while he is talking to his wife. It is here that he finally pays the price for starting the "War of 2007".

In Season 2, Beansie Gaeta is brutally assaulted by his former boss, Richie Aprile, at this pizza parlor in Paterson.

During the final season, Tony's consigliere, Silvio Dante, strangles Burt Gervasi to death at this house in Clifton.

At the time, Burt was conspiring with New York and attempting to turn people against Tony.

The scenes for Feech La Manna's house were filmed at 15 Sidney Street in Lodi.

It was here that Christopher Moltisanti and Benny Fazio managed to trick the former high-ranking capo into keeping a truck load of stolen televisions in his garage.