Take your own self-guided tour of some of the most infamous Zodiac Killer locations. 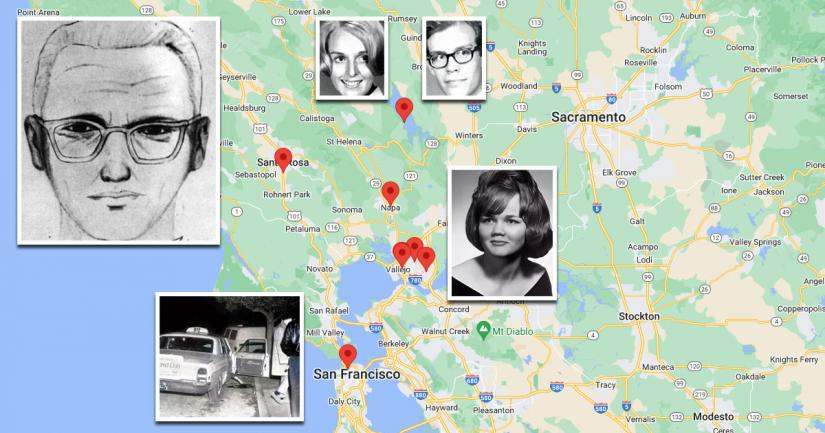 The Zodiac Killer is an unidentified serial killer who murdered at least five people between 1968 and 1969. He also wounded two others in his attacks.

Although most of his victims were young couples that he randomly selected, he also shot and killed a taxi driver in San Francisco.

Below, you will find a list of locations relating to his crimes. These include the murder sites and the places where he anonymously called the police.

We have also added a number of places relating to a man named Arthur Leigh Allen. This is because Allen is one of the strongest suspects in the case.

Each entry contains addresses, GPS coordinates, and important background information. You can also use our map to get a better feel for where each place is.

On December 20th, 1968, high school students Betty Lou Jensen and David Faraday were shot dead by the Zodiac Killer at this location on the northern outskirts of Benicia, California.

Although this was his first known attack, it didn't become apparent that a serial killer was on the loose until seven months later.

On July 4th, 1969, the killer carried out his second attack.

That night, he shot Darlene Ferrin and Michael Mageua at this parking lot beside Blue Rock Springs Park on the western outskirts of Vallejo.

Mageua miraculously survived the shooting. Sadly, Ferrin wasn't as lucky, as she passed away from her injuries shortly afterwards.

The location where the Zodiac Killer made his first phone call.

Roughly 40 minutes after he shot Ferrin and Mageua, the killer anonymously called the police from a payphone on the corner of Springs Road and Tuolumne Street.

During the call, he admitted to carrying out the shooting. He also claimed responsibility for the murders on Lake Herman Road.

At that stage, it became clear that a "boastful slayer" was on the loose.

On September 27th, 1969, the Zodiac Killer stabbed college students Bryan Hartnell and Cecelia Shepard while they were relaxing at this location beside Lake Berryessa.

The location where he made his second phone call.

Roughly 70 minutes after he stabbed Bryan Hartnell and Cecelia Shepard at Lake Berryessa, the killer claimed responsibility for the crime by anonymously calling the police from a payphone in Napa.

At the time, the phone was situated outside of a car wash. These days, it is a parking lot.

The street where he shot Paul Stine.

That night, he shot taxi driver Paul Stine in the back of the head while he was parked at this street corner in the Presidio Heights neighborhood of San Francisco.

Although the police were quick to respond to the incident, an incorrect description of the shooter allowed him to slip right past them.

At the time of the Blue Rock Springs shooting, victim Darlene Ferrin was working as a waitress at an IHOP restaurant at 1400 Tennessee Street.

These days, the building is home to a Mexican restaurant.

Arthur Leigh Allen is a strong suspect in the Zodiac Killer case.

When the murders first started, he was living with his parents at this house on Fresno Street in Vallejo.

Notably, this address is just around the corner from the restaurant where Darlene Ferrin worked. It is also a short walk away from the location where the killer made his first phone call to the police.

In the early 1970s, Arthur Leigh Allen started living in "Sunset Trailer Park" in Santa Rosa, which lies about 30 miles northwest of Vallejo.

The trailer park is situated at 2963 Santa Rosa Avenue on the southern outskirts of Santa Rosa.

These days, the trailer that he lived in no longer exists.

During this period of his life, Allen studied biological sciences at Sonoma State College.