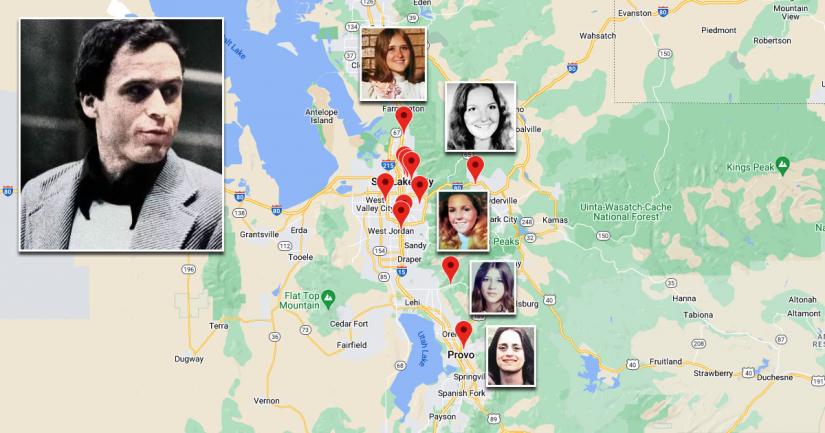 On September 2nd, 1974, serial killer Ted Bundy decided to leave Seattle and move to Salt Lake City in order to attend law school. By that stage, he had already murdered eight women in the Pacific Northwest.

Following his move to the Beehive State, it did not take long before he started killing again. Between October, 1974, and June, 1975, he murdered at least five women in the state of Utah. He also attempted to abduct 18-year-old Carol DaRonch from a shopping mall in Murray.

Below, you will find a list of location guides containing addresses, case information and GPS coordinates.

The site where Melissa Smith was found.

In October of 1974, Melissa Smith was abducted after leaving a pizza parlor in Midvale. Nine days later, her body was discovered at this location in Summit Park.

The location where Laura Ann Aime was found.

In November of 1974, Bundy dumped the remains of 17-year-old Laura Aime at this site outside of Salt Lake City.

The location where he was arrested.

In October of 1974, high school student Nancy Wilcox left this house in Salt Lake City and was never seen again. In 1989, Bundy finally confessed to her murder.

This is the rooming house that he was living in while he was attending law school in Salt Lake City.

This is the high school parking lot where Ted Bundy abducted 17-year-old student Debra Kent in November of 1974. More than 15 years later, her knee bone was discovered at a burial site near Fairview.

The site where he buried Debra Kent.

This is the location where he buried the remains of 17-year-old Debra Kent. The entrance is located 1.5 miles east of a small town called Fairview.

The mall where Carol DaRonch was abducted.

On November 8th, 1974, Bundy attempted to abduct Carol DaRonch from this shopping mall in Murray, Utah. Fortunately, DaRonch managed to fight him off and escape with her life.

In October of 1974, Ted Bundy abducted 17-year-old Melissa Smith shortly after she left this premises in Midvale.

The campus where Susan Curtis was abducted.

In June of 1975, 15-year-old Susan Curtis vanished from this college campus in Provo, Utah. Shortly before his execution, Bundy confessed to her murder. To this day, she remains listed as a missing person.

Bundy lived in an apartment at 364 Douglas Street for a short period of time in 1975 and 1976. At the time, he was under 24-hour police surveillance.

He was living at 413 B Street for a short period of time in 1976. During this period, he was standing trial for the kidnapping of Carol DaRonch.

This is the house where Ted's "other" girlfriend, Leslie Knudson, lived.

The couple dated for a couple of months during the summer of 1975.