This is the shopping mall where serial killer Ted Bundy abducted Carol DaRonch.

At the time, the building was home to Sears. These days, it is a department store called Dillard's.

That evening, Carol was standing outside Walden Book Stores in the Fashion Place mall when she noticed a man approaching her.

The man in question was Ted Bundy.

Bundy introduced himself as a policeman called Officer Roseland. He then asked her if she had parked her vehicle by the Sears entrance.

When Carol confirmed that she did, the "officer" told her that someone had been seen breaking into her car.

At that point, Carol agreed to follow him out of the mall. However, once they reached the Camaro, she saw that it was perfectly OK and that no valuables were missing.

Although she assured "the officer" that everything was fine, he convinced her to follow him and file a complaint against the suspect that "they" were detaining inside.

Once they went back inside the mall, Bundy looked around as if he were searching for someone. He then claimed that "they" must have taken the suspect to the police substation.

Bundy then led her out of the mall and across the street to a nearby building on 6100 South. He tried to open the door, but it was locked. After the door failed to open, he proceeded to walk halfway down the alley beside the building before turning around and coming back again.

While this charade was going on, Carol continued to watch him from the sidewalk.

When Bundy failed to open the door to the "police substation", she became suspicious and asked him if she could see some identification.

However, Bundy was quick to pull out an oval-shaped wallet and show her a silver police badge.

Carol felt more at ease after she saw the badge. Consequently, she agreed to go to the main police station with him and fill out a complaint against "the suspect."

The pair then walked across the street to Ted's car, which was a Volkswagen Bug with no license plates on it. Although Carol thought that it was a strange car for a police officer to be driving, she reasoned that he might be an undercover detective.

Once they got into the Bug, Bundy started to drive in the opposite direction of the police station. Then, about a half-mile away, he suddenly pulled the car up onto a curb outside of McMillan Elementary School.

Realizing that something was off, Carol started to "freak out" and demand to know what they were doing. However, Bundy seemed "removed" and did not respond.

While she was trying to open the door and escape, he grabbed her arm and put a handcuff on her left wrist.

At that point, Carol's life was beginning to flash before her eyes, and she started to envision a future where her parents would never find out what had happened to her.

During the struggle, she scratched and hit Bundy so much that it prevented him from being able to cuff her other wrist.

In an effort to scare her into compliance, he pulled out a small black gun and pointed it at her. However, Carol refused to give in. Instead, she continued to scream and struggle with him until she finally managed to escape the car.

After she fell out of the Bug, he pursued her with a crowbar. Fortunately, she was able to kick him, break free, and then run away. At that point, she flagged down a passing car. Meanwhile, Bundy jumped back into his Volkswagen and sped off.

Carol DaRonch was one of the few lucky women who survived an encounter with Ted Bundy.

Where was Carol DaRonch abducted?

The latitude and longitude coordinates for the mall are:

The lot where Carol parked is on the southwestern side of the mall. It sits beside the intersection between East Winchester Street and South Fashion Boulevard. The mall is pretty close to the Belt Route (Interstate 215).

Check out our "Photos" section for details about the other locations.

Photos of the mall and other related images.

Sears at the Fashion Place mall. This is a Google Street View image of the old Sears building at the Fashion Place mall in Murray. It was taken in August, 2011.

The department store closed its doors in the spring of 2013 after 41 years. 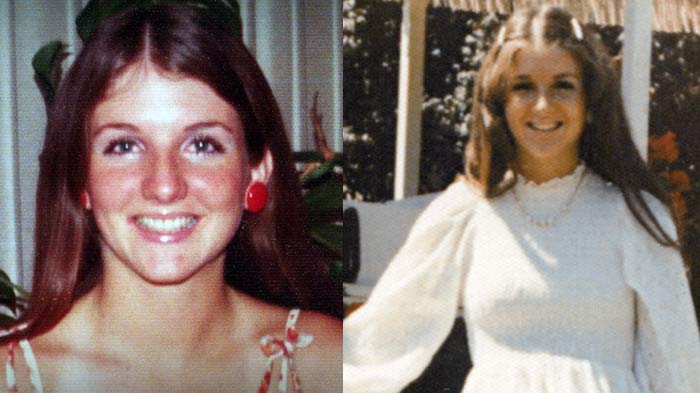 At the time of the attack, Carol DaRonch was an 18-year-old typist who lived at home with her parents.

After finishing work, she drove to the Fashion Place mall at around 7 p.m.

Bundy approached her while she was looking in the window of Walden's Book Store. According to DaRonch, he was polite and sounded well-educated. Bundy walked Carol over to this building at 6100 South under the guise that it was a police substation. However, it was really just a closed laundromat. This is the parking lot that Bundy drove to after he picked up Carol DaRonch. The red circle highlights the exact location where he pulled the Volkswagen up onto the curb. It was here that he finally let his mask slip and attempted to handcuff her.

This lot is on the western side of McMillan Elementary School, close to the intersection between South Fashion Boulevard and 5900 South.

In 1975, Carol DaRonch identified Ted Bundy as her attacker during this lineup. 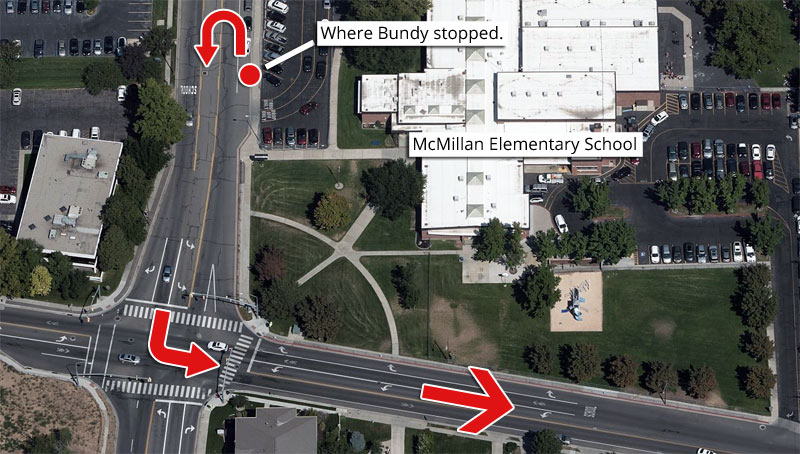 After Carol DaRonch escaped, Bundy did a U-turn before turning left onto 5900 South.

Fashion Place mall during the 70s. This photograph of the Fashion Place mall is from the 1970s. When Bundy approached Carol, she was standing outside of this book store. Carol retells her story in the 2020 docuseries "Ted Bundy: Falling for a Killer".