A map and location guide to the Long Island serial killer and his victims. 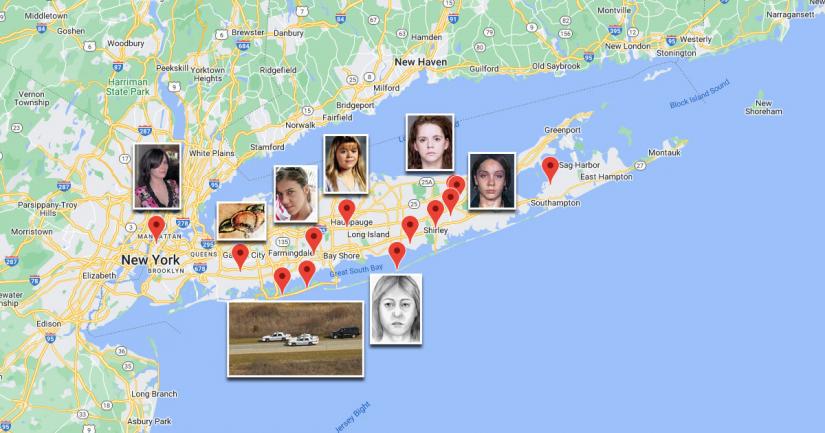 To this day, his identity remains unknown.

Most of his victims were female sex workers. He is also suspected of murdering a young child and an Asian male.

Below, you will find a list of locations that relate to his crimes. These include his dump sites and places where his victims were last seen.

We have also featured a number of places relating to convicted murderer John Bittrolff. This is because the authorities consider Bittrolff to be a strong suspect in the case.

Each entry contains GPS coordinates, Google Maps links, addresses, and important background information. You can also use our map feature to get a better visual understanding of the case.

Note that we may expand this location guide over time.

In December of 2010, the remains of four murdered sex workers were discovered at this location on Gilgo Beach. The women had been strangled, placed in burlap sacks and then dumped in the thicket off Ocean Parkway.

The discovery of the "Gilgo Four" made it clear that a serial killer was operating in the area.

In the months that followed, the authorities discovered four more victims at three separate sites near Gilgo Beach.

In June of 1997, the torso of an unidentified woman called Peaches was discovered at this site in Hempstead Lake State Park, New York.

The site where Peaches' extremities were found.

On April 11th, 2011, a police search term discovered the arms and legs of an unidentified woman called "Peaches" at this site in Jones Beach State Park.

DNA tests confirmed that the remains belonged to a woman whose torso was dumped at Hempstead Lake State Park in 1997.

In 1996, two men discovered the legs of a woman at Blue Point Beach on Fire Island. Fourteen years later, investigators uncovered her skull on Tobay Beach.

To this day, she remains unidentified.

The site where Valerie Mack was found.

In November of 2000, three hunters discovered the torso of Valerie Mack at this site near Halsey Manor Road in Manorville, New York.

In July of 2003, a dog walker discovered the torso of Jessica Taylor at the end of this access road in Manorville, New York.

The 20-year-old was found just half a mile away from the location where Valerie Mack's remains were found in 2000.

This is the former home of the suspected Long Island serial killer, John Bittrolff. In 2017, he was found guilty of the murders of Rita Tangredi and Colleen McNamee and sentenced to life in prison.

In January of 1994, 20-year-old Colleen McNamee was found murdered near this intersection in Shirley, New York. In 2017, John Bittrolff was convicted of her murder.

In November of 1993, the body of 31-year-old Rita Tangredi was discovered at this site in East Patchogue. In 2017, John Bittrolff was convicted of her murder and sentenced to 25 years-to-life.

On June 6th, 2010, sex worker Megan Waterman left this hotel in Hauppauge to meet a client. That was the last time anyone saw her alive.

Six months after she went missing, her remains were discovered in a burlap sack on Gilgo Beach.

Three months later, the 27-year-old's remains were discovered at a roadside on Gilgo Beach.

In November of 1993, two hunters discovered the partially clothed body of Sandra Costilla in this wooded area in North Sea, Southampton. The police believe that convicted murderer and suspected serial killer John Bittrolff is responsible for the crime.

On the night of July 9th, 2007, Maureen Brainard-Barnes left this motel in Midtown Manhattan to meet a client.

Three and a half years later, investigators discovered her remains at Gilgo Beach.

On July 12th, 2009, sex worker Melissa Barthelemy left this house on Underhill Avenue in the Bronx and was never seen again.

Fifteen months later, her skeletal remains were discovered among the Gilgo Four.