This is the exact location where Irish gangster Martin "The General" Cahill was shot dead in August of 1994.

It is situated at the junction of Oxford Road and Charleston Road in Ranelagh, Dublin.

At around 4 p.m. on August 18th, 1994, the gangland figure left his home in Swan Grove and jumped into his black Renault 5.

He then proceeded to drive down Oxford Road, towards the junction with Charleston Road.

When Cahill slowed down at the junction, a man in a reflective yellow vest walked over to his car with a .357 Magnum revolver and opened fire.

"The General" was shot multiple times and died instantly. During the shooting, his Renault continued to roll across Charleston Road. It then came to a halt against the black railings on the other side of the street.

Afterwards, the assassin, who was not wearing a mask, calmly jumped onto the back of a waiting motorbike, which proceeded to drive off in the direction of Rathmines.

Meanwhile, crowds of shocked onlookers started to gather at the scene.

Broken window glass littered the street, and one of Ireland's most infamous criminals lay slumped over to one side in his car.

A couple of hours later, the Provisional IRA claimed responsibility for the murder. According to their statement, Martin Cahill had sold stolen paintings to a loyalist paramilitary called the Ulster Volunteer Force.

The UVF then sold these paintings abroad in order to help fund their organization.

Although Cahill was an experienced criminal, he did not have the means to fence the paintings himself. As a result, he offloaded them to the UVF.

It was his decision to do business with an organization that murdered Irish nationalists that ultimately cost him his life.

Where was Martin Cahill shot?

The latitude and longitude coordinates for the junction are:

The shooting took place at the intersection between Charleston Road and Oxford Road. The junction is beside the park at Belgrave Square. It is a 5-10 minute walk from the center of Rathmines.

Ranelagh is an affluent suburb on the south side of Dublin. It does not have a bad reputation for violence. This location is relatively close to places such as the Swan Shopping Centre, the Leinster Cricket Club, and the Royal Hospital in Donnybrook.

Photos of the junction and other related images. This photograph of the crime scene shows Cahill's black car stopped against the iron railings.

A red privacy sheet was thrown over the front of the windscreen. The arrow in the middle illustrates the direction that the car was coming from when the attack took place.

This image was taken from the driveway of 45 Charleston Road. At the time of his death, Cahill was staying at 21 Swan Grove. In 2005, the house was seized by the Criminal Assets Bureau and then sold.

In the 1998 film The General, he is shot dead immediately after he gets into his car. However, this is incorrect, as he was not shot outside of his house.

The movie was also inaccurate in its portrayal of the gangster. Instead of portraying him as the violent criminal that he was, it painted the picture of a jovial "Robin Hood" type figure who thumbed his nose at the authorities.

Unfortunately, this portrayal was removed from reality. For example, in 1988, he yelled obscenities at his elderly neighbors and threatened to burn their house down. He also reportedly tortured people by stapling their fingers to the floor and hammering nails into their hands. The attack occurred at the junction of Oxford Street and Charleston Road.

Witnesses stated that the gunman was a man in his mid-30s who had dark brown hair. He spent most of the afternoon standing at the corner with a clipboard and posing as a traffic planner.

The hitman's accomplice was a motorcyclist who drove up and down Oxford Street, pretending to be a courier. His job was to scout out Cahill's position and make sure that he was still in Swan Grove. This aerial image shows the route that his car took.

He refused to show his face. 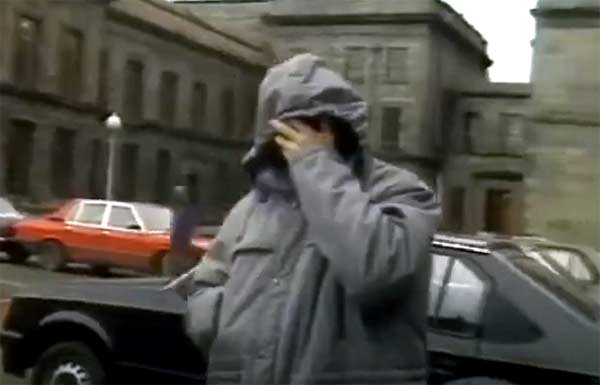 Cahill refused to show his face to members of the media. If reporters were present, he would pull his hood up over his head and then cover his face by using his hands. Sometimes, he would even show up at the courthouse wearing a balaclava. Following the shooting, his vehicle rolled across the street and crashed into the side of this entrance. Cahill was gunned down shortly after he left his house in Swan Grove.

According to a number of reports, he was returning a rented copy of the film Alien 3 (1992) at the time. However, this is incorrect. The movie was actually A Bronx Tale (1993).